Dicembre 2011. Amboseli National Park
Today marks the last day of fieldwork with Graeme Shannon and Karen McComb on the elephant cognition project, which has involved using playback experiments to study social and ecological knowledge among elephant family groups. Back in May 2007 at the beginning of the project, one of the first groups that Graeme and I spotted were the JBs, and Jemima the matriarch had a new female calf that was less than a week old - named Julep. Now, 4.5 years later, we saw the JB family once again, and this time with two new calves. The youngest, which I estimated to be born last night was a female and the mother was Jalila, daughter of the matriarch. The second, born to Jemima (matriarch) was a young male approximately 3 days old, but we immediately noticed that this calf looked very different, and on closer inspection I realised that the calf was in fact an albino, with white tail and body hair, pale skin, and very pink ears. This active little calf is the first albino elephant that I have seen during my 19 years in Amboseli studying elephants. From 9:45 am when we first spotted the family, we spent over an hour with them as they slowly walked to the swamp (Eastern Longinye), taking photos and video to record this unusual sighting, which I wanted to share with everyone. 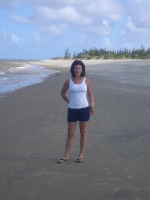